Excellent public relations is vital for your business and brand, but it is resource-intensive.
Is yours one of the many companies that simply does not have enough time, expertise or market knowledge to manage their PR properly? If so, we can help.
Fab-Biker PR specialises in motorcycle public relations and has been making sure clients get noticed since 1996. We provide plug-in support, where and when it's needed.
Find out more at www.fab-biker.co.uk
July 24, 2012 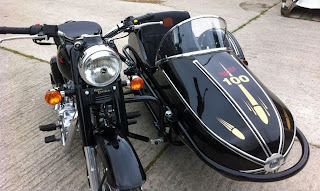 Watsonian sidecars celebrate their centenary this year and to mark the occasion the British manufacturer is throwing a party at Stoneleigh Park near Coventry on 18-19th Aug 2012.

Founded by TF Watson in 1912, Watsonian has survived two world wars, the Great Depression of 1929 and a devastating factory fire in 1930. Today the company still makes Great British sidecars in the Heart of England, exporting across the globe.

Among the many other attractions are the company archives, driving skills test, sidecar trials display, prizes for Best in Show (whatever the make), trade stands and an opportunity to test ride Royal Enfield motorcycles, which have been distributed by Watsonian since 1999.

Camping and self catering accommodation is available on site, as is the Stoneleigh Park Lodge guest house. On Saturday evening there will be entertainment with a live band and bar selling a special celebration ale.

Tickets for the weekend cost £10 per person in advance; day tickets will only be available on the Sunday and can be purchased at the gate for £5.  Children under 16 go free and parking is also free  For more information on the Centenary Rally call 01386 700907 or visit the special centenary website.
Email Post