Excellent public relations is vital for your business and brand, but it is resource-intensive.
Is yours one of the many companies that simply does not have enough time, expertise or market knowledge to manage their PR properly? If so, we can help.
Fab-Biker PR specialises in motorcycle public relations and has been making sure clients get noticed since 1996. We provide plug-in support, where and when it's needed.
Find out more at www.fab-biker.co.uk
November 08, 2012

Norman Hyde has commissioned two new designs of T-shirt to celebrate the 40th anniversary of his FIM world sidecar land speed record. Driving an 850cc Triumph Trident powered outfit and reaching speeds in excess of 180mph, Norman recorded an average speed of 161.8 miles per hour (260.30 km/h) at RAF Fairford in 1972.

Both designs are printed on 100% American heavyweight cotton shirts featuring the Triumph logo prominently.  One is printed on the front only in a distressed finish, while the other is printed on both sides, with a large photograph of the record-breaking Roadrunner III outfit on the front. 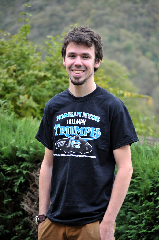