The Ride - London to Beijing DVD 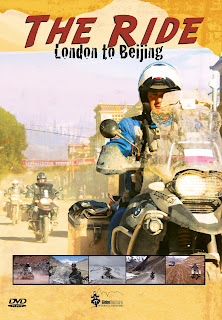 The Ride - London to Beijing follows double Guinness World Record Holder and GlobeBusters founder, Kevin Sanders, as he leads a group of novice motorcycle over-landers on the first  expedition to attempt a trans-Asian crossing from London to Beijing, via Tajikistan and Everest Base Camp.

Their journey takes them along the fabled Silk Road, via some of the most remote and inhospitable regions on the planet, including some of the world's highest navigable passes where sudden altitude sickness can kill and through snowy avalanche-prone mountain ranges. They also encounter landslide-stricken dirt highways, cross swollen rivers and battle with the traffic in some of Asia's most dramatic cities.

Filmed throughout by  Adam Giles and produced by Cambridge Filmworks, who also made the Alaska to Patagonia series that was broadcast on the National Geographic Channel, this two hour film opens a window on places rarely seen on motorcycle tours.  Locations include Western Tibet, the Hindu Kush, the Pamir Highway on the Afghanistan border and the largely undiscovered 'Stans', where political violence erupted without notice.

Just as fascinating as the scenery is the emotional roller-coaster experienced by the riders, as they attempt to cope with the physical and mental challenges being hurled at them. "This is extreme adventure television at its best - real, raw and in the moment - taking the viewer on one of the most sensational rides on the planet" says Kevin.

The Ride - London to Beijing is available  priced at £24.99 from www.globebusters.com (where you can also view clips of the film) or at www.facebook.com/globebusters.
Email Post