Excellent public relations is vital for your business and brand, but it is resource-intensive.
Is yours one of the many companies that simply does not have enough time, expertise or market knowledge to manage their PR properly? If so, we can help.
Fab-Biker PR specialises in motorcycle public relations and has been making sure clients get noticed since 1996. We provide plug-in support, where and when it's needed.
Find out more at www.fab-biker.co.uk
September 06, 2017 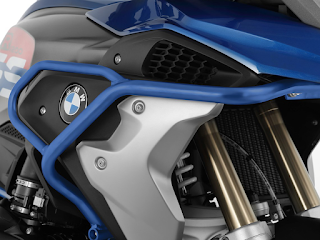 Even a static or low speed fall can damage the Boxer engine's vulnerable cylinder heads and engine casings, bodywork and other components, disrupting or even halting journeys altogether, so both Upper and Lower Engine Bars are available for complete peace of mind.

Tailor-made to fit, they are attached via multiple mountings to existing anchor points on the frame, adding minimal width and weight, without affecting handling or cornering clearance.

The Upper Engine Bars cover the bodywork, upper engine casings and lower section of the petrol tank, and feature a connection tube between the two sides for extra strength.

They can be fitted independently, or in conjunction with the Lower Bars, BMWs OE lower crash bars, and Wunderlich's Cylinder Head Guards. They also serve as a useful mounting point for Wunderlich Spotlights.

The Lower Bars have a total of six mounting points – again to existing anchors on the frame – as well as a central mount, which acts as a pivot point during a fall. Each side has integrated valve cover protection too.

They’re designed to follow the contours of the Boxer engine closely, so as not to compromise ground clearance and cornering ability, and allow full access for general maintenance work, such as oil changes and valve adjustment.

They too can act as a convenient mounting point for Wunderlich Micro-Flooter Spotlights.

Both sets of bars are also available in stainless or black finishes.