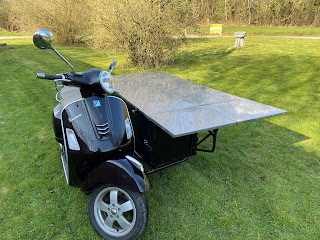 Watsonian have built sidecars for many special projects in their 108-year history, including one for Harry Potter, but this is a first - a sidecar to bring Asian street food to the UK public.

Cornish chef Adrian Jones travelled extensively in Asia over the past six years and was inspired to bring the flavours of freshly-cooked street food to the British public. Rather than use a van to transport his cooking equipment and ingredients, he asked Watsonian to build him a specially-designed sidecar outfit for his new Dandelion Noodles venture;

"Why a motorbike and sidecar? As you travel Asia, you see motorcycles everywhere" comments Adrian. "They are workhorses, carrying whole families of five or six or huge loads of goods. Add a sidecar and it becomes a taxi or delivery service. And many become mobile restaurants, feeding locals and tourists alike".

Watsonian paired a 300cc Vespa scooter with their popular Platform Chassis and added a tradesman's box that can be folded out to create a 2.5 square metre stainless steel work surface.

At one end of the counter food is cooked in woks, heated by eco-friendly clay ovens called taos, and then served on biodegradable palm leaf plates to customers sitting at the opposite side.

The platform chassis is made from tubular steel, with welded joints, and powder-coated for durability. Hydraulic suspension is fitted to give a smooth and stable ride and a Vespa wheel is used, to match the scooter. 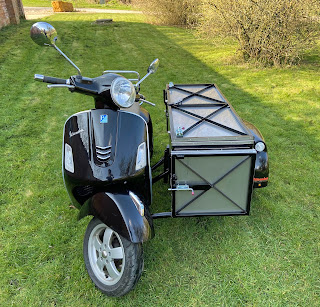 Notes: Watsonian sidecars was founded by TF Watson in Birmingham in 1912. The company is the UK's largest and longest-established sidecar manufacturer and exports its products across the world. In 2010 Watsonian supplied sidecar outfits for filming of Harry Potter and the Deathly Hallows – Part 1
Email Post