Excellent public relations is vital for your business and brand, but it is resource-intensive.
Is yours one of the many companies that simply does not have enough time, expertise or market knowledge to manage their PR properly? If so, we can help.
Fab-Biker PR specialises in motorcycle public relations and has been making sure clients get noticed since 1996. We provide plug-in support, where and when it's needed.
Find out more at www.fab-biker.co.uk
December 18, 2020 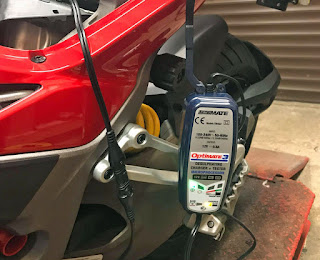 Improvements in clothing and tyres, plus the addition of rider aids like ABS to bikes and scooters, means many commuters are riding further into the winter season. Their numbers are now being swelled by people switching from public transport to powered two wheelers, which offer a more Covid-secure environment.

OptiMate, the battery-saving experts, advise riders to take extra care of their electrical systems during the cold winter months, when it is under far greater strain than normal.

A flat battery is a major headache for anyone who needs to get to work and jump-starting a motorcycle or scooter can cause more problems than it fixes – potentially damaging the battery, electrical system or both.

Connecting a bike to an intelligent charger, such as an OptiMate, between rides will ensure the batery is monitored, maintained and kept in peak condition, ready for action on those cold dark mornings.

Prices start at £39.99 inc VAT for the OptiMate1 Duo, which can charge both lead acid and Lithium Ion batteries and alternative models are produced for CAN-bus equipped bikes.

OptiMate also produce a range of plug-in Battery Monitors, which provide an instant check of the charge in a motorcycle battery, without the need to remove seats or bodywork to attach a voltmeter.

See the complete OptiMate range of chargers and monitors at www.optimate1.com